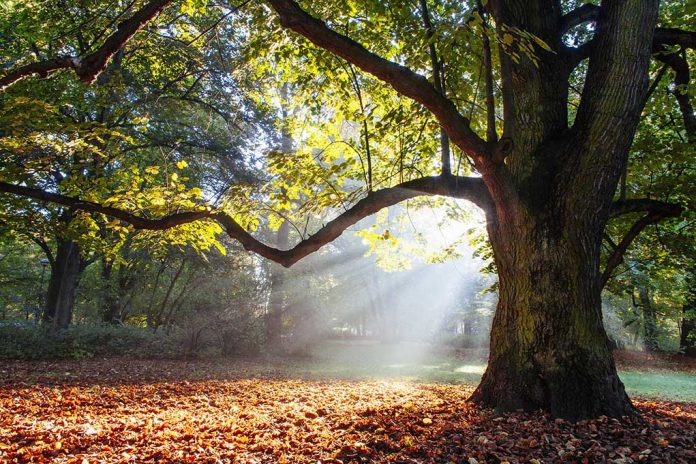 (NewsReady.com) – For decades, there have been calls to save the rainforest. In recent years, similar cries have made their way to the US as suburbs wipe out forests across the country. It’s not just wooded areas in the Amazon or rural America that are seeing trees depleted; it’s happening in communities all over.

A Florida woman recently set out to save an old tree, and the way she did it was a little strange.

In 2018, Karen Cooper heard the City of Fort Myers granted a request from a developer to cut a 100-year-old ficus tree down in a neighborhood park. The tree, which has an 8,000-foot canopy, is the focal point of Snell Family Park. Drawing inspiration from other conservationists around the world, Cooper decided to marry the tree.

You read that right.

In a ceremony on a sunny March day, Cooper walked down the aisle to say “I do.” About 80 neighbors attended the event and there was music, food, and flowers. She even had a maid of honor, flower girls, and a ring bearer.

“We all stood there, made a vow to protect the tree, then cake and mimosas,” she said about the ceremony. “It was tree-mondous.”

Her effort to protect the tree worked. The city announced later that the tree was no longer going to be removed from the park. Cooper said she decided to wed the ficus tree after reading similar stories about women in Mexico.

The same year Cooper married the tree, Cosmopolitan Magazine published a story about conservationists in Columbia and Mexico marrying trees for similar reasons. In 2014, Richard Torres led an event to raise awareness about the dangers of deforestation by marrying a tree.

Women in Mexico followed his lead, holding marriage ceremonies to protest against land clearing and illegal logging. Although none of the unions are legal, it’s a creative way to alert people to a problem that many countries are experiencing. Sometimes having fun is the best way to leave an impression on people who might later help solve the problem. Just look at how Cooper saved the tree.