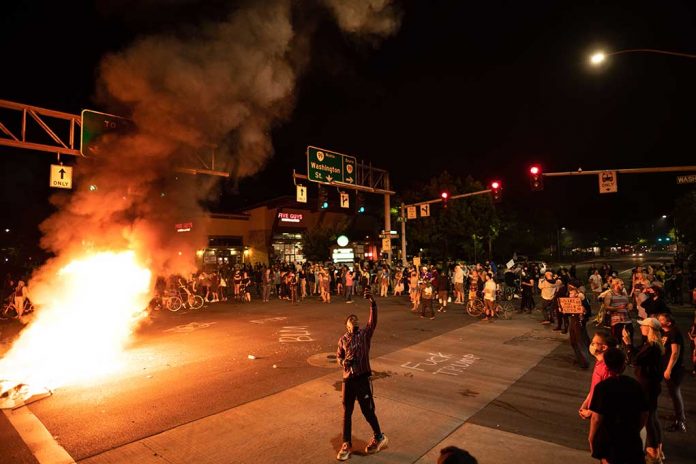 (NewsReady.com) – The media and Democrats have spent days attacking President Donald Trump and his supporters. They have accused the Right of insurrection and trying to overthrow the government because the president held a rally in Washington, DC on January 6th. Every single night they have repeated this narrative to the American people without any evidence to support it.

Congressmen have said that they believe Antifa infiltrated the rally and began causing violence. But, the media has ignored those allegations, probably because they do not fit the narrative. Republicans have been quick to point out how different the coverage of the Capitol unrest is compared to the BLM riots over the summer.

Here are three times the media and the Democratic Party have ignored and forgiven riots started by violent Leftists.

In June, Harris spoke to Stephen Colbert about the unrest across the country. Instead of condemning BLM and Antifa for starting the riots, she said the movement wasn’t going anywhere and praised it.

On a June episode of his show, CNN’s Chris Cuomo watched as riots took place across the country and said there’s no rule saying protests should be “polite and peaceful.” Apparently, he missed the part of the First Amendment that said Americans have the right to “peaceably assemble.”

CNN's Chris Cuomo: "Please, show me where it says protesters are supposed to be polite and peaceful."

As riots and looting have broken out in cities across the country, this is the message the brother of New York governor Andrew Cuomo shares at the top of his show. pic.twitter.com/ZZ47zpyVlx

In May, CNN’s Don Lemon compared the riots to the Boston Tea Party.

“Our country was started because, the Boston tea party. Rioting. So do not get it twisted and think this is something that has never happened before and this is so terrible and these savages and all of that. This is how this country was started” –@DonLemon on @CNN 11:53 PM ET. pic.twitter.com/dGu5TmArsp

These are just three examples, and there are literally dozens more just like it. Unfortunately, they’re unlikely to see the hypocrisy of it all.