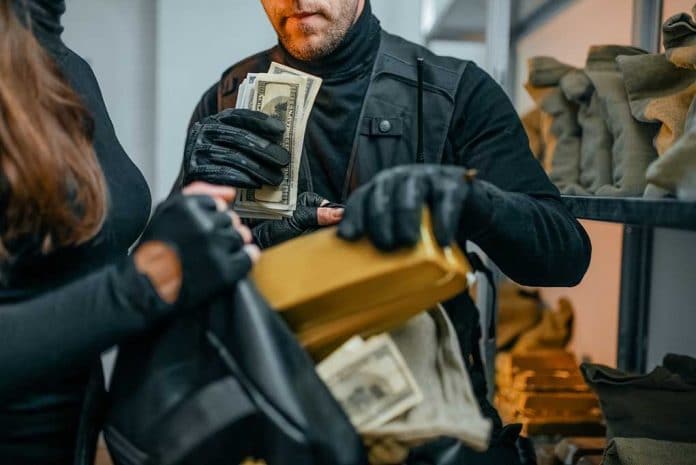 (NewsReady.com) – The COVID-19 outbreak in Brazil far outpaces its fellow South American countries. According to Statista, the nation has had more than 20 million confirmed cases. Argentina comes in second with a little over five million coronavirus cases. Reports out of the country paint a horrific picture of economic and healthcare woes.

The Brazilian government has implemented an aid program to help citizens who are struggling to make it through the pandemic. However, experts believe that’s creating a new problem: bank heists.

On August 30, a terrifying scene played out in the city of Araçatuba. According to police, 20 people in 10 cars robbed 3 banks. The robberies weren’t ordinary, though. Instead, they were like something from a multi-million dollar Hollywood film.

The robbers reportedly used drones to keep watch on the police from above. After the robberies, the criminals took hostages. Video shows footage of victims strapped to cars as the suspects used them as human shields. The suspects booby-trapped the city. An explosion from a bomb led to a man having his leg amputated (some reports say he lost both feet). They also blocked streets with burning cars, turning the city into a war zone.

Araçatuba Mayor Dilador Borges told Band TV police had a hard time stopping the criminals. “The police can’t go on the attack, they can’t confront them because there are too many lives on the line,” he said.

A firefight erupted between officers and the suspects, leading to the deaths of three individuals, including two innocent civilians. Five others suffered injuries, and police arrested two alleged robbers.

The robberies on Monday weren’t the first of their kind. In December, a group of heavily armed robbers carried out a series of heists in Cameta. The criminals targeted Banco do Brasil, Caixa, Santander, and Banco do Para. They took about 15 people hostage at that time, and also shot at police. One person died in the incident.

Residents of the city posted videos of the clash between police.

Another attack took place in Criciuma. Those robbers also took hostages, used 10 cars, and rolled into the city 30 people deep.

Experts believe the robberies result from banks keeping more money on hand to help those in need during the pandemic. Police have not said whether they’ve connected the crimes.