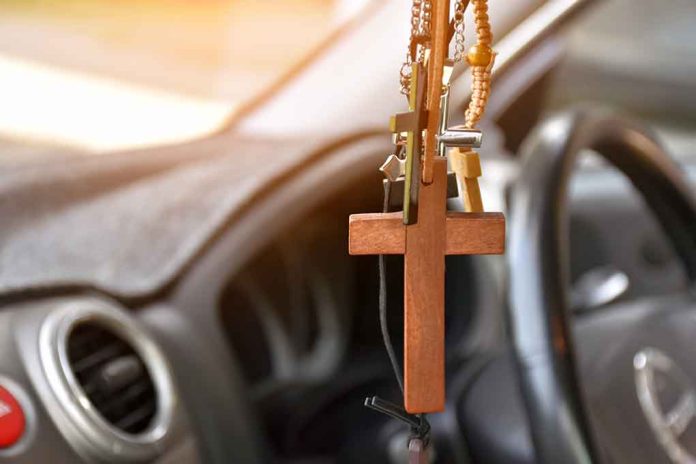 (NewsReady.com) – An elderly priest had an incredible escape last month after an out-of-control SUV swerved towards his car — but was thrown over it instead a split second before impact. Both drivers escaped almost unharmed. Was a guardian angel really on the scene of the near tragedy?

On October 2, 87-year-old Father John Bok was heading to Sunday mass in Milford, Ohio, in his Hyundai sedan. What he didn’t know was that, on another nearby road, 17-year-old Braden Varner had just suffered a seizure at the wheel of his SUV. The heavy vehicle swerved out of control, crossed a field, then headed straight for the driver’s door of Father John’s car. Video from a security camera shows an imminent disaster — but then, a fraction of a second before impact, Varner’s SUV hit a steel pole beside the road. The pole bent under the force of the collision, but not before it diverted the vehicle up, sending it flying through the air to skin just inches above the roof of the priest’s Hyundai. A moment later, the SUV crashed back to earth and rolled out.

Father John didn’t even see the collision coming. The first warning he got was a glimpse from the side of his eye of something flying over. Varner had no history of seizures, but is now being treated for epilepsy. He escaped the accident with nothing more than a small cut on his hand.

How did a seemingly inevitable accident come to be avoided? Well, the mass Bok was on his way to celebrate was for the Feast of the Guardian Angels. Noting the coincidence, the semi-retired priest added, “I don’t know what God was thinking.”