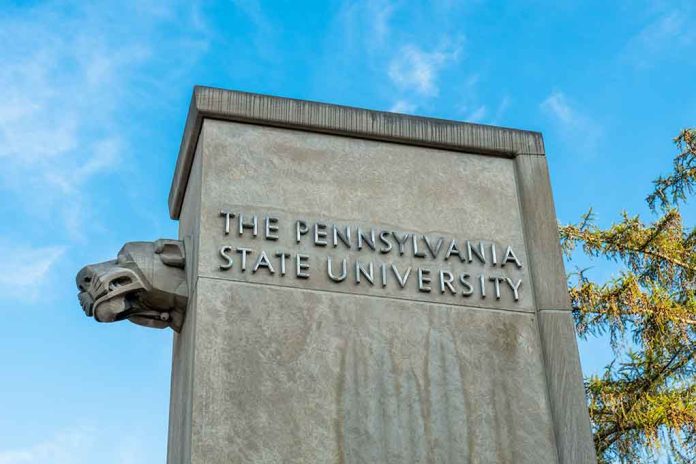 (NewsReady.com) – Conservatives have repeatedly spoken out about being censored by universities and colleges around the country after complaints by students. Pennsylvania State University is the most recent school to silence voices on the Right.

On October 24, Penn State announced it canceled a student-sponsored event featuring comedian Alex Stein and Proud Boys Founder Gavin McInnes. The school had previously refused to stop the event, but before it was set to begin on Monday, officials had a change of heart. Angry demonstrations that led to at least one physical altercation were being blamed for the decision.

Pennsylvania State University canceled a planned comedy event that was to be co-hosted by the founder of the Proud Boys after a demonstration against the speakers turned violent. https://t.co/Eti6tej07D

Protesters were speaking out against McInnes’ appearance on campus. He’s a controversial figure who has been banned from social media platforms for hate speech. The Southern Poverty Law Center (SPLC) has labeled the Proud Boys a hate organization. In recent years, the group has been involved in the Charlottesville Attack and was at the US capital on January 6, 2021.

Despite the controversies surrounding the group, the First Amendment protects McInnes’ right to say whatever he chooses as long as he isn’t inciting violence. Stein, the conservative comedian who was supposed to be at the event, was filmed near the protesters. The people who didn’t want “hate” on their campus reportedly yelled insults like, “I hope you [expletive] die.”

Do you think everyone should have a right to speak on college campuses?