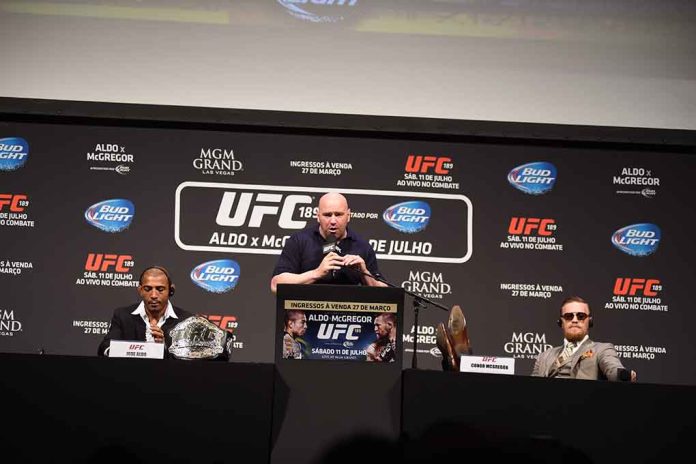 (NewsReady.com) – Dana White has served as the Ultimate Fighting Championship (UFC) president for more than 20 years. He’s credited with developing the organization into an incredibly successful business. However, after an incident on New Year’s Eve, some are calling for him to resign from the company.

A video circulating the internet shows White and his wife, Anne, hanging out at a nightclub in Cabo San Lucas. The couple and their party were seated in a VIP area above the dance floor. The video shows the UFC president leaning over and speaking to his wife, and she responded to whatever he said by slapping him in the face. White responded by slapping her across her face, too. That’s when friends of the two jumped up and broke up the fight.

TMZ’s Harvey Levin spoke to Dana White about the incident in a recorded interview. The businessman admitted that he and his wife of 26 years were heavily intoxicated while at the club. Still, he said there was “no excuse” for him to assault his wife. White went on to say he was very embarrassed by the incident and that the couple had apologized to one another.

For her part, Anne told TMZ that her husband’s behavior was “out of character” and nothing comparable had ever happened between the two of them before that night. She said that she would like privacy moving forward.

My good friend @danawhite is so greedy he decided to steal fighter pay from his new league on TBS ‘Power Slap’ by getting fighter of the night against his WIFE. Those Boston aerobic instructors are real tough guys. https://t.co/4YF4vHKIOG

@danawhite You should resign. Shameful. Set an example, and step down. I was always a fan, redeem yourself here. You have no business running this organization after what you did.

There is also an unconfirmed rumor that Warner Media has pulled the plug on his Power Slap League program on TBS.

A Warner Media source tells me Dana White’s Power Slap series is no longer listed on any internal programming schedules and all ad spots have been dropped. The death of the deal, I’m told, is basically just paperwork at this point.

Do you think White should resign?