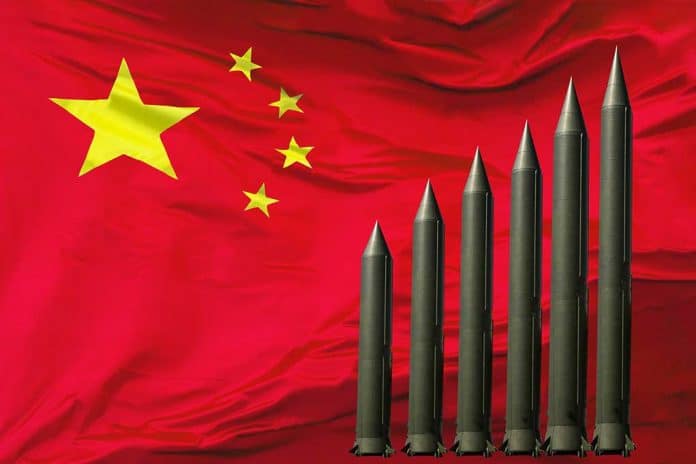 (NewsReady.com) – China’s Communist regime has started a massive expansion of its nuclear forces, according to new satellite imagery. Combined with Beijing’s territorial ambitions and increasing aggression towards Taiwan, it’s a worrying development directly threatening US security.

On June 30, satellite imagery emerged showing over a hundred new missile silos under construction in a remote Chinese desert. Researchers in Monterey, CA, have examined satellite imagery near Yumen in northwest China and identified 119 probable silos under construction. Combined with other identified sites, that means the repressive one-party state is building a total of 145 new missile launchers.

Right now, China’s nuclear forces are quite small, estimated to be less than 400 warheads and around 90 intercontinental missiles. If the Communist country arms all the new silos, that would more than double their strategic force. China’s latest ICBM, the CSS-20 “Dongfeng-41” missile, can carry up to 12 nuclear warheads.

Imagery shows that the silos are arranged in a “dense pack” layout for protection; a warhead striking one of the closely-spaced silos will destroy its target but also throw up a debris plume that will destroy other incoming warheads and buy time for the surviving silos to launch.

China has used decoy missile silos before, so it’s likely not all the new launchers will be armed. Even so, it’s an alarming increase in their strike potential. Premier Xi’s regime has ramped up aggressive intrusions into Taiwanese airspace and regularly threatens to invade the US ally; we can’t afford to let Beijing narrow the gap in military power any further.