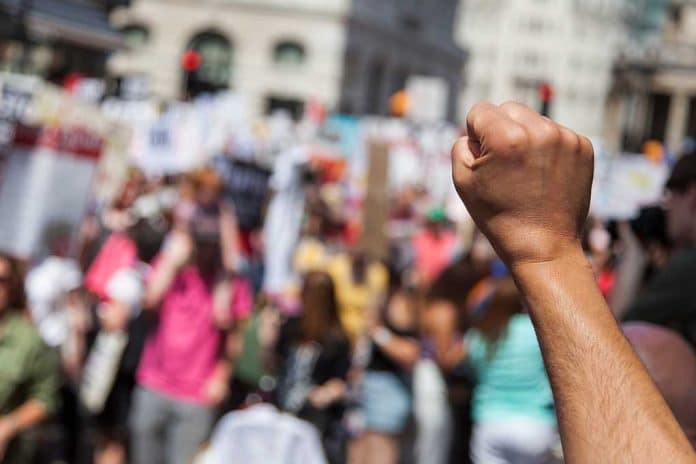 (NewsReady.com) – Dozens of people have been arrested in Los Angeles, CA after far-left activists attacked police and feminists. LA cops say dozens of weapons were found after the violent clash.

On July 17, a group of protesters gathered outside the Wi Spa in Los Angeles to demand women-only spaces inside the Koreatown resort. The protest was sparked by a recent incident where a transexual exposed their male genitals in a women’s locker room, which became the subject of a viral video. In response, women’s rights activists called on the spa to keep men out of women’s changing rooms – but were attacked by Antifa counter-protesters.

Due to unlawful behavior, an unlawful assembly has been declared in the area of Wilshire Blvd and S Coronado St. Everyone must leave the area.

Around 11 a.m. on Saturday, July 17, police declared an unlawful assembly after Antifa threw smoke bombs and other missiles at officers. When the rioters refused to disperse, cops moved in and arrested dozens. A sweep of the area found an array of weapons, including mace, knives, and stun guns.

California law prohibits discrimination against trans people, and woke businesses have allowed activists to use that law to force their way into traditionally female spaces. Now, if a man wants to get into a woman’s locker room in California, all they need to do is claim they identify as female – and they can walk into a room full of women and girls. Actual women are being squeezed into a corner, and now left-wing rioters are willing to fight to keep them there.