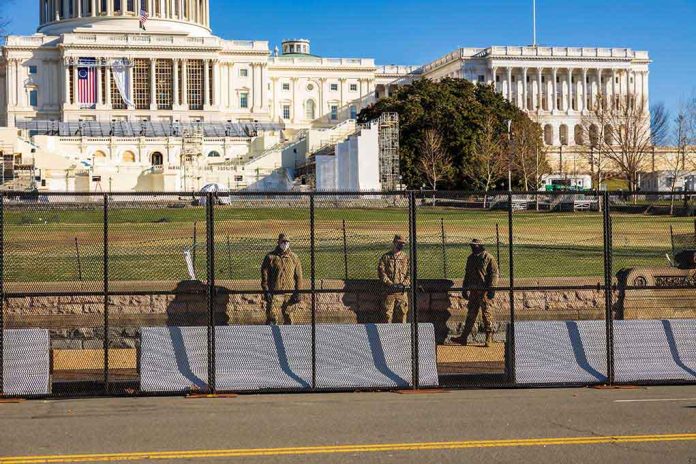 (NewsReady.com) – One of last year’s grimmest sights was the steel fence that surrounded the Capitol, cutting the American people off from their government. Erected after the January 6 riots, it was a classic case of shutting the door after the horse had bolted, and most people thought it couldn’t come down soon enough. Now, incredibly, it’s going up again.

The government will be re-erecting a fence around the US Capitol like they had in the months following J6 in anticipation of a "Freedom Convoy" mimicking the Canadian truckers' movement targeting Biden's State of the Union on March 1.https://t.co/uTWAOintON

President Joe Biden is due to give his State of the Union address on March 1, and officials have launched a huge security operation to protect the event from possible protesters. The amount of security for this speech is unprecedented.

Initially, House Speaker Nancy Pelosi (D-CA) even wanted to restrict the number of representatives who could attend to 25. She’s changed her mind and all members of Congress will be able to attend, but now attention has shifted back to keeping the public away from the building. On Sunday, February 20, US Capitol Police confirmed the fence will be reinstalled ahead of Biden’s address.

Of course, the administration has a new excuse for the fence this time. The Canadian Freedom Convoy, made up of truckers and their supporters, has been camped on Ottawa’s Parliament Hill for three weeks now. Inspired by that, a “MAGA Convoy” is reportedly due to set out from Los Angeles, CA, heading for Washington, DC. While it isn’t scheduled to get there before the State of the Union address, the administration is worried that it or similar protests might. So, yet again, our public servants are going to shut themselves away behind a ring of steel.