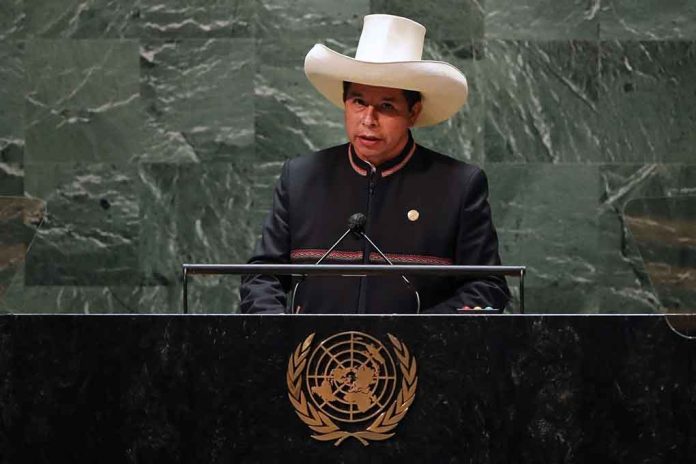 (NewsReady.com) – Peru’s political landscape at the moment can be summed up with one word: wild.

The 200+-year-old South American country is going through a tremendous amount of political turmoil thanks to its leftist former president. On Wednesday, December 7, Peruvians woke up with one person in charge, but by the time they went to bed that night, a new president had taken the oath of office — and the other one was in jail.

As the day began, it was clear early on that it was going to be a historical one. Then-President Pedro Castillo announced he was going to install an emergency body of government and dissolve Congress. He also wanted to hold parliamentary elections to create a new constitution for the country, and ordered a nightly curfew to start that night. That caused four cabinet members and the Peruvian military’s leader to resign.

The embattled president’s announcement came as lawmakers were mounting a third impeachment attempt in less than a year and a half. The leader had also faced multiple criminal investigations.

After the announcement, then-Vice President Dina Boluarte, 60, slammed Castillo in a tweet written in Spanish, calling the move a “coup that aggravates the political and institutional crisis” in the country.

Congress responded to Castillo by voting 101-6 to remove him from office because of his “permanent moral incapacity,” according to the Associated Press. After the vote, Boluarte was sworn in as the country’s new and first female president.

Castillo left the presidential palace in Lima and went to the police station. Prosecutors later announced he’d been arrested on a charge of rebellion. In a statement, federal prosecutors said they “condemn [Castillo’s] violation of constitutional order.”

Boluarte was a lawyer before she took office, and she was elected vice president in 2021 when Castillo took office. The new president is fluent in Quechua, the language spoken by native people in South America. She also speaks Spanish.

The New York Post reported Boluarte asked for a truce in Congress and unity so she could be given “time to rescue the country.”

Since 2016, the South American country has experienced one crisis after another. In 2019, President Martín Vizcarra used his powers to dissolve Congress. He called for new elections, but those didn’t go as he’d hoped because the next year, the new body of legislators voted to remove him from power.