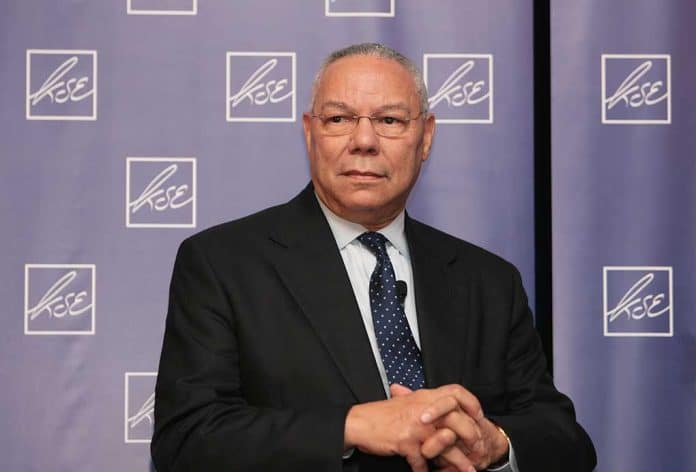 (NewsReady.com) – General Colin Powell, the decorated senior soldier who went on to serve as Secretary of State under President George W Bush, has died at the age of 84. Tributes are pouring in for a man described as “a great American” and “a leader and a statesman.”

Colin Powell was the epitome of a soldier-statesman. Agree with him or not, he was a patriot committed to public service and doing his very best to advance U.S. interests. He left an indelible mark on the U.S. Military and this nation. May his memory be a blessing. https://t.co/CozjCruKjj

Colin Luther Powell was born in Harlem, NY, on April 5, 1937, and his parents were both Jamaican-Scottish immigrants. Raised in the South Bronx, he joined the City College of New York’s ROTC and graduated at the top of his class.

Then, Powell was commissioned into the US Army in 1962 and was one of the first 16,000 American soldiers to deploy to Vietnam. He went as a military adviser to the South Vietnamese army. In 1968, he returned to Vietnam as a major for a second tour before earning an MBA from Georgetown University and taking up his first political job in the White House Office of Management and Budget.

By 1976, Powell was a senior commander, taking over the 2nd Brigade of the 101st Airmobile Division and, later, V Corps in Germany. From 1987 to 1989, as a Lieutenant-General, he was Deputy National Security Adviser to President Ronald Reagan. After being promoted to full general, he commanded all Regular, Reserve, and National Guard units in the continental US before becoming the first African-American Chairman of the Joint Chiefs of Staff. Powell chaired the JCS through the 1991 Persian Gulf War, the largest US military operation since Vietnam.

In the 1996 presidential election campaign, Powell won the Republican New Hampshire primary through write-in votes despite not standing as a candidate. His popularity with the Republican base encouraged President GW Bush to appoint him as Secretary of State, a position he held from 2001 to 2005 – years that saw the start of the long-running war against Islamist terrorism.

Powell, who was undergoing treatment for blood cancer, died from complications of COVID-19 on October 18, 2021.