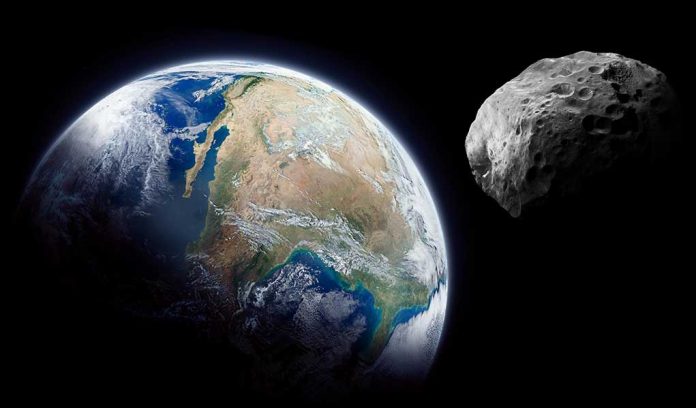 (NewsReady.com) – It’s been a busy few weeks for scientists who keep a close watchful eye over our celestial neighborhood. An asteroid first spotted by the Pan-STARRS survey in mid-September 2022, RM4, cruised by the Earth on November 1 at a distance of approximately 1.4 million miles. While that is over six times further away than the moon, its relative size and close fly-by continue to spark debate about the threat of a potential collision in the future.

RM4 is a Potentially Hazardous Asteroid (PHA) that currently orbits our sun once every 1,400 days. Its elliptical path causes it to periodically fly by the Earth at distances close enough to merit monitoring. Still, researchers don’t believe it poses a threat to our planet at this time.

According to Space Reference, RM4 is classified as a “very small” Apollo-class asteroid, but the term “small” is a bit relative. The giant rock is estimated to be similar in size to the US Capitol building, with an approximate maximum diameter of up to 2,400 feet. For perspective, that’s only slightly smaller than the Burj Khalifa in Dubai, the world’s tallest skyscraper.

While RM4 is technically larger than 90% of all other known asteroids, that, too, is a bit deceptive. According to NASA, the currently known asteroid count sits at 1,113,527. The vast majority of those space rocks are far, far smaller in size than RM4, measuring as little as a few feet across. Vesta, the largest asteroid ever spotted, has an estimated diameter of 329 miles.

Italian astronomer Gianluca Masi, who works with the Virtual Telescope Project, managed to capture a photo of RM4 shortly before it flew by the Earth.

Potentially Hazardous Asteroid 2022 RM4 is safely coming as close as 2.3 millions of km, six times the average lunar distance. We images it minutes ago, waiting to show it live to you at its flyby!
🔭👇📸https://t.co/bcwXTM2ihM pic.twitter.com/tNpbUcibpC

Masi, who spoke to Newsweek about the event in an exclusive interview, clarified that the telescope was actively moving at the time the image was captured. That’s why RM4 presents as a white dot in the middle, while the stars surrounding it look more like streaks.

The astronomer also took the time to point out the fact that RM4’s classification as a PHA doesn’t necessarily mean it represents a direct threat to life on Earth. “Every asteroid larger than about 140 meters and moving on an orbit approaching that of the Earth within 7.5-million km is flagged as a PHA,” he explained.

RM4 is far from alone in our skies, and it isn’t the only space rock to attract attention in recent months, either. Scientists with the American Astronomical Society recently used a dark energy telescope to spot the behemoth 2022 AP7 hiding in the glare of the sun. They published a study containing their findings in the Astronomical Journal shortly afterward.

Labeled a “planet-killer” by some, the massive asteroid is estimated to have a diameter of up to 1 km (0.6 miles). That makes it the largest space rock detected in almost a decade.

While it’s true that 2022 AP7 has the potential to cause widespread devastation if it were to collide with Earth, the name “planet-killer” is a bit misleading. At the very least, it’s unlikely to result in the apocalypse any time soon. According to lead study author Scott Sheppard, who spoke to EuroNews, “It has no chance to hit the Earth currently.”