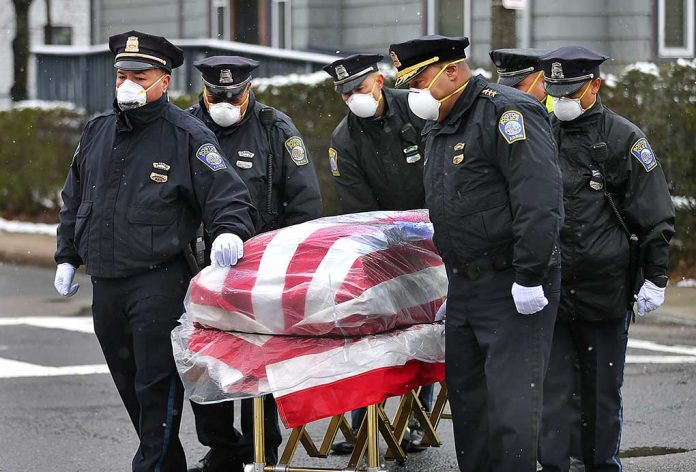 (NewsReady.com) – Crime in the US has steadily risen over the last year, making it especially tough on police officers. Not only did departments across the nation mourn the 330 cops killed by COVID-19, but they faced an obscene amount of violence as they tried to protect the country.

On January 3, the National Fraternal Order of Police (FOP) revealed that 346 police officers were shot in the line of duty in 2021. Of those shot, 63 of them died. It was one of the most violent years for police officers recently. In 2020, 312 cops were shot and 47 died.

As violent crime reached historic levels in 2021, so did the attacks on law enforcement:

If your elected officials don't suport law and order.. VOTE THEM OUT in 2022! pic.twitter.com/D1kuGBNWDt

Ambush-style attacks on law enforcement were up 115% from the previous year. There were 103 attacks that left 130 officers with gunshot wounds. Texas saw the highest number, 43, of officers shot in the line of duty.

FOP President Patrick Yoes spoke to Fox News about the shootings, he said there’s an “erosion of respect for law enforcement and anti-police rhetoric” that’s led to more violence against the police. Democrats across the country are encouraging that sentiment by pushing for cities and states to defund the police. Despite the danger officers face every day, Yoes said they will “continue to hold the line” and keep civilians safe from dangerous individuals.