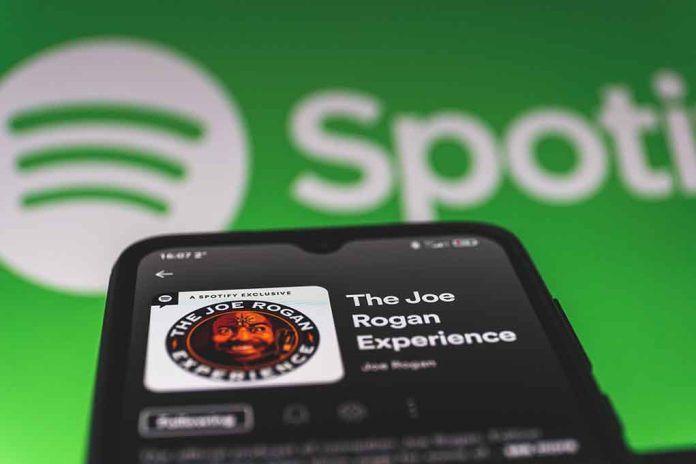 Joe Rogan Reveals Why Trump Is Not Allowed on His Show

(NewsReady.com) – Joe Rogan is the most popular podcaster on Spotify. Roughly 11 million people tune into “The Joe Rogan Experience” to hear each show. Some listeners might have noticed he has never had former President Donald Trump on as a guest and he says that’s intentional.

Rogan appeared on the 300th episode of Lex Fridman’s podcast where he discussed politics. He said he believes the era of the 45th president is going to be “one of the weirder times” historically because some Americans “abandoned their own ethics and morals” to criticize him and his voters. He went on to call Trump an “existential threat to democracy itself.”

According to Rogan, Trump will run again and he’s going to be “running against a dead man,” because President Joe Biden “shakes hands with people [sic] aren’t even there.” He was referencing an incident when the POTUS appeared to be shaking hands with the air after an April speech in North Carolina. But all of that doesn’t mean the comedian supports Trump. He said he will not have the former president on his show, despite having multiple opportunities to do so because he doesn’t “want to help him.”

Fridman told his guest he thinks it’s important to have some people on the show just to talk to them, like Kanye West. Rogan said it’s true but people like West don’t “change the course” of America. He explained he doesn’t know enough about the nuances of politics to have an educated conversation or call out the former president.

What do you think about Rogan’s remarks?