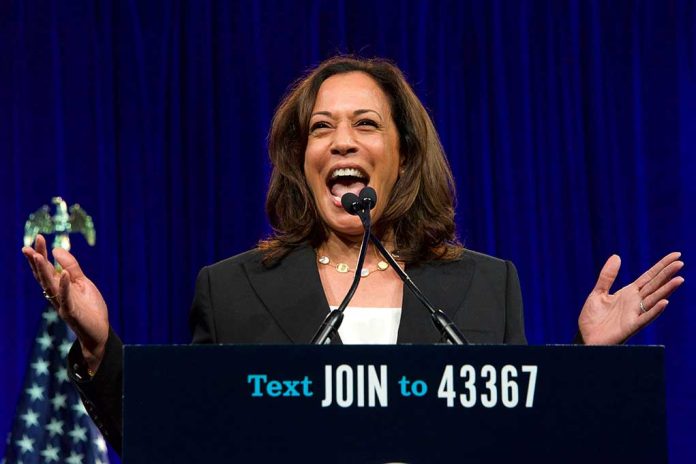 (NewsReady.com) – Vice President Kamala Harris was once one of the Democratic Party’s biggest stars. They considered her sharp, witty and likable. Over her first year in office, public opinion of her has shifted and people have wondered how she ever landed the second-highest elected office in the land. Her recent explanation of the Ukraine conflict highlighted those concerns.

This is terrifying. Or Hilarious. Or both.https://t.co/hII3Vi08RU

Harris appeared on the “Morning Hustle” radio program recently. During her interview on the syndicated morning show, co-host Headkrack asked her to explain what was happening in Ukraine.

The Vice President began speaking slowly to listeners, saying, “So, Ukraine is a country in Europe,” and its neighbor is Russia, a bigger and stronger country. She went on, explaining the conflict like she was speaking to a toddler, saying the big country invaded the little country and “that’s wrong.”

Apparently, the VP thinks “layman’s terms” means to talk to people like they’re morons and Conservatives weren’t happy about it. Washington Examiner Executive Editor Seth Mandel pointed out how insulting it was.

Ppl are calling her 'dumb' over this but that's unfair: the point is that's what she thinks of the audience. She just has a real inability to talk normally to ppl. Layman's terms doesn't mean 'assume the audience has never heard of Russia.'

Brian Riedl, a senior fellow at the Manhattan Institute, told his Twitter followers that his nine-year-old daughter was working for Harris as a speechwriter now. In reality, the nine-year-old probably would have explained it better.

How do you feel about the VP’s explanation?