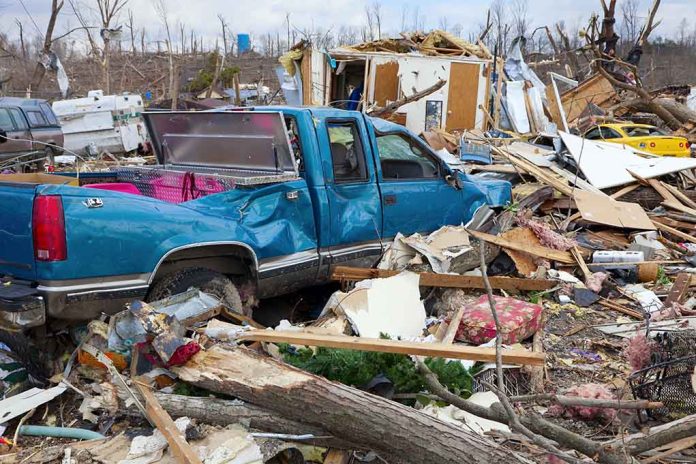 (NewsReady.com) – Kentucky’s governor, Andy Beshear (D) has asked for federal assistance after the state was hammered by severe tornadoes last weekend. So far, at least 74 Kentuckians are confirmed dead and over 100 are still missing; thousands more are homeless.

On December 12, Deanne Criswell, chief of the Federal Emergency Management Agency (FEMA), told journalists that Beshear has formally asked the federal government to upgrade the Kentucky storms from “emergency” to “major disaster.” Beshear declared a state of emergency on December 10, after thunderstorms spawned devastating tornadoes across the South and Midwest.

Thank you @POTUS for your rapid approval of Kentucky’s Major Disaster Declaration. Our entire congressional delegation came together to support @GovAndyBeshear’s request. I appreciate the Administration’s quick work to speed resources to help deal with this crisis. pic.twitter.com/3rBPGcDMmK

Arkansas, Illinois, Missouri and Tennessee were all hit by tornadoes on the night of December 10, leaving at least 88 dead, but Kentucky was the hardest hit. So far, it ranks as the second-worst tornado disaster in the state’s history, just behind an 1890 Louisville storm that killed 76 – but the death toll is likely to climb higher.

On Sunday, Kentucky’s elected representatives, led by Senate Minority Leader Mitch McConnell (R-KY), signed a bipartisan appeal to President Joe Biden to grant Beshear’s request. Biden quickly approved the request, unlocking more federal aid to the state, which is struggling to cope with the scale of the damage. Many emergency vehicles in Kentucky were damaged by the storm, and the operational ones are obstructed by blocked roads. This is one time the federal government needed to act quickly — and did.