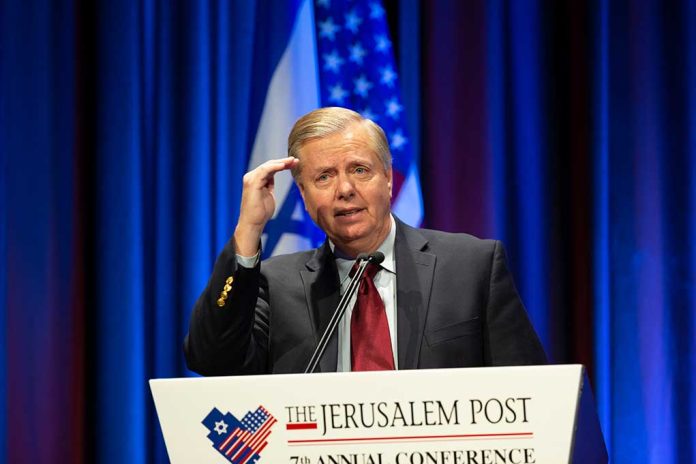 (NewsReady.com) – Lawmakers have been fighting over the debt ceiling for months. That’s the amount of money the Treasury Department can borrow to pay the bills America has incurred. Democrats already raised the ceiling once, but now it needs to happen again. Senator Lindsey Graham (R-SC) is warning Republicans that they could face backlash from former President Donald Trump if they help the Left. But, some of his colleagues ignored his advice.

Over the summer, Senate Minority Leader Mitch McConnell (R-KY) made it clear that the GOP wasn’t going to join the Left and raise the spending limit. In October, the fight came to a head and it looked like the country might default on its debts. Democrats temporarily raised it on their own, kicking the can down the road to December.

Now, the time has come to raise the limit again. Just like before, there’s a fight over the move. Conservatives know the debt ceiling needs to increase, but the majority of them think Democrats should have to do it themselves since they’re the ones who want to keep spending money like it’s going out of style.

On Wednesday, December 8, Republican senators sat down together for a private lunch. During the meal, Graham slammed McConnell for setting up a deal with Senate Majority Leader Chuck Schumer (D-NY) that gave Democrats a pathway to raise the debt ceiling. The South Carolina Republican said the GOP’s Senate leader led the caucus up a hill while they were being “shot in the back.”

Graham warned Conservatives that if they went along with McConnell’s plan, they should know Trump is “going to be engaged on the issue,” implying they would be betraying him by raising the limit.

Trump lashed out on McConnell, too, accusing him of folding on the issue and calling it a “total victory” for the Left. “The Old Crow is a disaster!” Trump said of the Senate minority leader.

Despite the warning from Graham, the next day senators voted to allow Democrats to raise the debt ceiling with a simple majority instead of requiring them to get 60 votes to clear a filibuster. Fourteen Republicans backed McConnell’s plan, voting to move forward. Will those senators pay a political price?