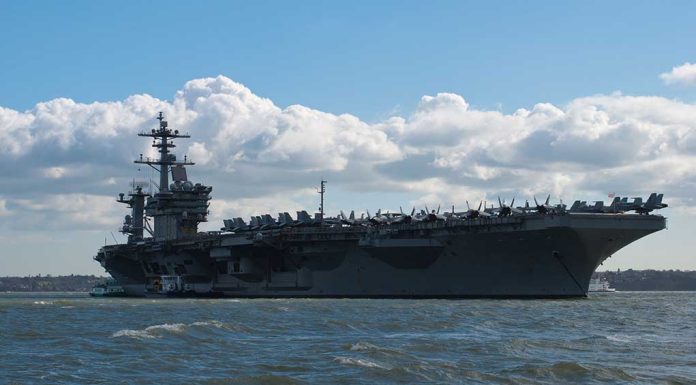 (NewsReady.com) – FBI Director Christopher Wray has called China the biggest economic threat to the US. The Pentagon has warned that the Chinese are developing their military at a rapid pace. China even reportedly tested a nuclear-capable hypersonic weapon over the summer, and recent satellite images show the military is using something alarming as target practice.

On November 7, the US Naval Institute reported the communist country created a new target range with a fake US carrier and two Arleigh Burke-class destroyers. The military placed the replicas at a target range in the Ruoqiang region in central China. According to the institute, the replicas prove the Chinese military is continuing to “focus on anti-carrier capabilities, with an emphasis on US Navy warships.”

The news comes after the Department of Defense (DOD) released its 2021 China Military Power report, in which the Pentagon revealed the Chinese military will likely increase its nuclear stockpile to 1,000 warheads by 2030.

China’s increased military strength comes at a time when tensions between the communist country and Taiwan are at an all-time high. China has repeatedly threatened to force the Taiwanese to “unite” with them, even telling the US its military would face consequences if it tried to help. The latest news shows how serious the Chinese are, but what will President Joe Biden do about it?