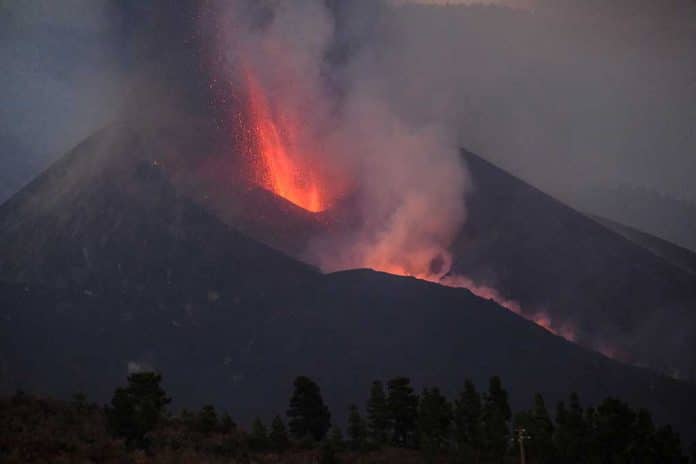 (NewsReady.com) – In September, the Cumbre Vieja volcano erupted on the island of La Palma, in Spain. A month after the eruption, lava is still spewing from its peak and its residents are living in fear.

According to a Reuters report, some of the island’s residents are camping in the streets while they wait for the volcano to stop spewing. More than 6,000 residents have left their homes. Lava has covered 2,000 acres on the island, destroying farms and property. Residents told reporters that when one area would stop spewing, another vent would open up.

Meanwhile on La Palma, Canary Islands. The volcano eruption is intensifying. A second vent has opened south-east of the main crater.🌋 pic.twitter.com/G0DuQbpZiU

Many people have been worried about the animals stranded by the lava. Recently, drone operators were going to launch a mission to save trapped dogs, but then they realized the animals were gone. They found a spray-painted message that said, “The dogs are fine,” and the message was signed “A Team.” Authorities have not yet figured out the identities of the rescuers.

Experts say there’s no way to predict how long the event is going to last. Carmen del Fresno, from the National Geographic Institute, said that although records show eruptions last between 24 to 84 days, trying to make predictions would be pointless. For now, residents are just taking life one day at a time.

Trump Jr Slams Democrats for Making Heroes Out of Predators