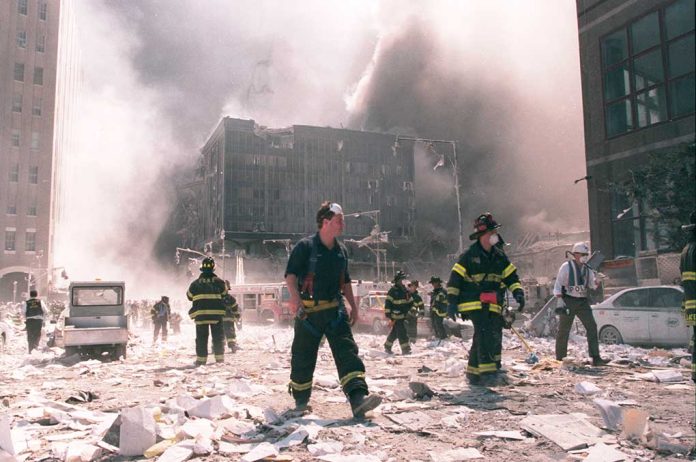 (NewsReady.com) – The September 11 terrorist attacks of 2001 hit everyone in the US hard. That day was especially traumatizing for New Yorkers, where 2,763 died. That’s what makes what two state lawmakers recently did especially egregious.

On Tuesday, March 8, climate activists held a rally in Albany outside of the state Capitol to demand Democratic Governor Kathy Hochul add more money to her $216-billion budget proposal for initiatives to help the environment. Two lawmakers, state Senators Rachel May (D-Syracuse) and Robert Jackson (D-Manhattan) held a sign that read: “Climate change … Wake up America. 2050 is too late.”

The words on the banner weren’t the problem – the imagery was. It depicted a jetliner with the words “climate change” across it flying into the original Twin Towers that were destroyed in the 9/11 terrorist attacks.

US Rep. Lee Zeldin (R-NY) was absolutely disgusted by the banner, calling for voters to kick them all out of office on November 8.

This is sick. NYS Sens Robert Jackson & Rachel May are comparing climate change to 9/11 to woo support for their far-left Green New Deal agenda. There's NO comparison. To think these are the people running the show with Hochul is all the more reason to TOSS THEM ALL OUT on Nov 8! pic.twitter.com/e95u8K1rcg

NY Sen. Minority Leader Robert Ortt (R-Lockport) called the lawmakers’ display a “shameful use of 9/11 imagery” to push their own political agenda.

The Democratic lawmakers essentially exploited the worst terrorist attack in the history of the country. Thousands of lives changed when those planes slammed into buildings and a field. Twenty years later, the pain of that day is still raw for many Americans, and using it to try to get money for initiatives that aren’t remotely related is controversial indeed.