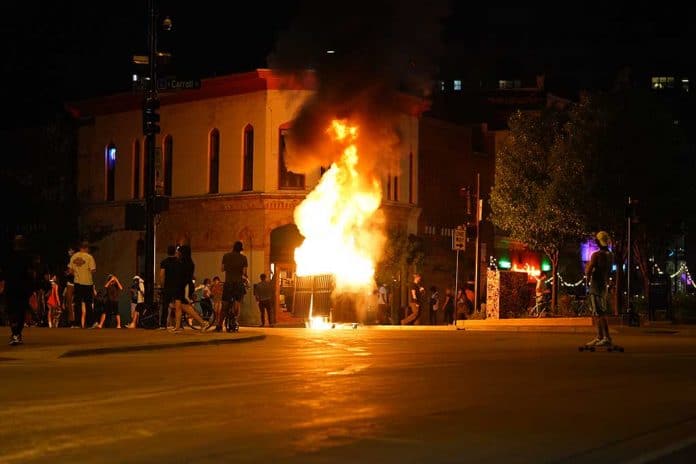 (NewsReady.com) – The Proud Boys and Antifa have clashed multiple times over the years. One group is far-Right and the other is far-Left. When they meet up, it almost always turns violent, and that’s exactly what happened recently.

On June 18, the Proud Boys were in Oregon City hosting a voter registration drive. The group had a permit for the event. What should have been a peaceful day of civil engagement turned violent when members of Antifa showed up at the event at Clackamette Park. Video of the confrontation shows Antifa burning an American flag. The right-wing group walked over and tried to put the flames out.

Suddenly, people began spraying chemicals and fighting one another. The two sides assaulted each other with bats and other weapons. Children can be seen playing on a swing set while the two sides clashed.

A Portland Tribune journalist, Zane Sparling, told KOIN 6 News that he saw “Civil War 2.0” at the park, saying it was “open warfare” between the two sides. Oregon State Police and local police officers declared a riot as a result of the incident and cleared the park.

The latest clash proves the two groups have no plans to bury the hatchet anytime soon. Hopefully, no innocent people are caught in the crossfire the next time they decide to meet up.