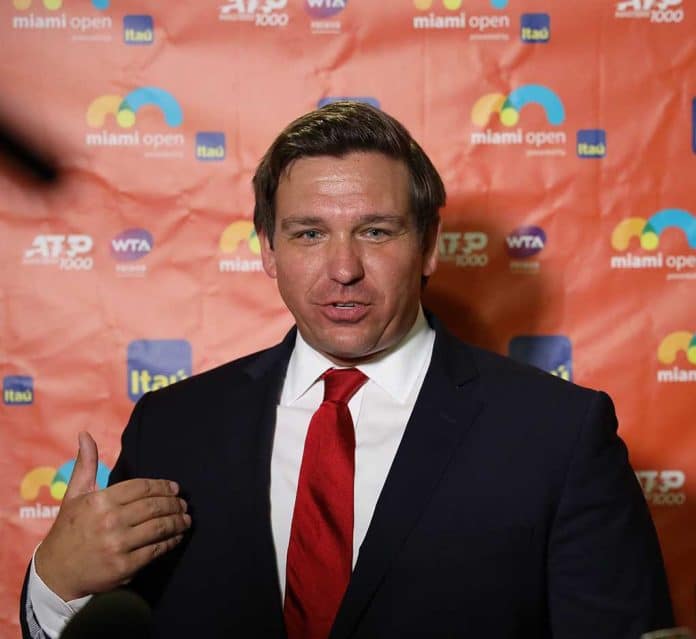 (NewsReady.com) – Florida Governor Ron DeSantis (R) has made a name for himself on the national stage over the last year for his stance against COVID-19 mandates. His popularity increased during former President Donald Trump’s administration, but skyrocketed once President Joe Biden took office. Recently, the governor unveiled new campaign merchandise in his store.

On Wednesday, November 17, the new merch hit his campaign website, and one item raised eyebrows. Two golf balls are enclosed in a box that says “Florida’s governor has a pair” of balls and “hold the line,” a slogan made popular on January 6. His campaign team released a video on Twitter showing a golf club hitting one of the balls and it sailing in the air. A caption above the video talked about DeSantis’ fight to stand for freedom.

.@RonDeSantisFL had the courage to stand his ground and fortify Florida as the model of freedom. Now, we’ve got the golf balls to back it up. 👀

The Fortified in Florida Golf Ball Set is available EXCLUSIVELY on our storefront! Get yours ⬇️🔥https://t.co/X7zY3NZGY4 pic.twitter.com/cRvbbmrSks

The edgy golf balls aren’t the first time the governor has trolled his haters with campaign merchandise. In July, he sold a koozie featuring the question: “How can I drink a beer with a mask on?”

The governor is up for reelection in 2022. As of right now, it looks like he has a pretty good chance of winning. Florida used to be a swing state, but it’s starting to trend red. Residents voted for Trump in both 2016 and 2020. Currently, FiveThirtyEight has DeSantis winning all of the theoretical races.