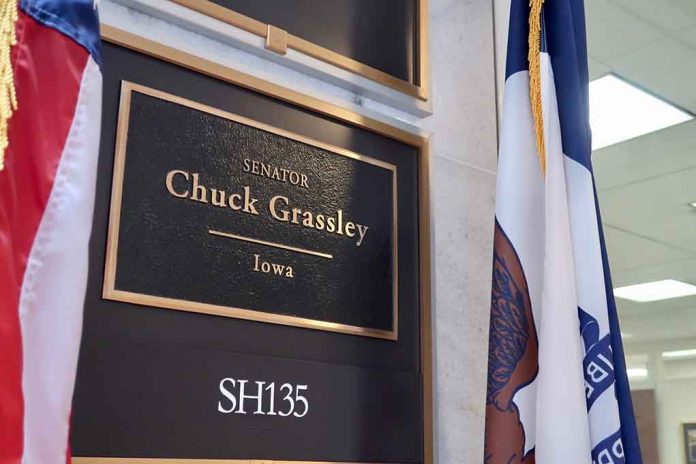 Senator Grassley Calls In FBI — There Were Threats!

(NewsReady.com) – The conservative justices on the Supreme Court (SCOTUS) have faced a tremendous amount of backlash over the decision to reverse federal protections for abortion. Pro-choice activists have doxxed and threatened members of the high court. A Republican senator is now demanding the FBI do something about it.

Senate Judiciary Committee Ranking Member Chuck Grassley (R-IA) sent a letter to FBI Director Christopher Wray asking the agency to fully investigate “cases of abortion-related violent extremism.” The lawmaker pointed out that there has been an increase in violence since the leak of the draft opinion of the Dobbs v. Jackson Women’s Health Organization decision in May. Activists have attacked pro-life clinics and churches, threatened members of the SCOTUS, leaked the home addresses of the justices, and taken other actions.

Grassley also mentioned that groups Jane’s Revenge and Ruth Sent Us called on extremists to riot in the streets. Flyers allegedly made by the groups also included threats that read, “if abortions aren’t safe, you’re not either.”

NEW → @ChuckGrassley is seeking a briefing on the @FBI’s response to outbursts of riots and violence by pro-abortion extremists following the #SCOTUS ruling in Dobbs v. Jackson Women’s Health Organization.

The senator promised to ensure “that the law is being enforced equally across the ideological spectrum.” Grassley said he thinks the wave of violence is going to continue for some time and pointed out the FBI wasn’t prepared for it in 2020. For that reason, he requested a briefing from the agency to find out how it intends to handle the wave of pro-abortion violence.

In addition to the senator’s requested probe, there’s still an ongoing investigation into who leaked the draft opinion.