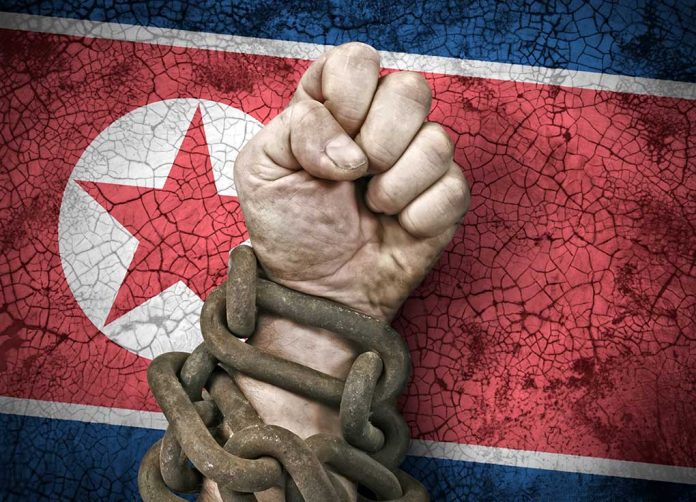 (NewsReady.com) – North Korea’s Kim Jong-un oversees one of the most brutal regimes in the world. The government is accused of vicious political assassinations, starving its citizens, indoctrinating the population, and abusing prisoners in its work camps. Although the allegations span decades, it’s very hard to get legitimate news reports out of the country because of the government’s grip on the media.

New satellite images reportedly show just how brutal one of the work camps is for the prisoners serving their sentences.

On November 11, satellite images of the T’osŏng-ni labor camp were released to the public. The Daily Mail published images showing starving prisoners lined up inside of the camp. The photos are the first to show the inmates clearly enough to be able to tell they’re people, even though the view is from far above. When looking at the satellite images, viewers can see little black outlines of humans standing between industrial buildings.

Kim Doohyun, who escaped North Korea, confirmed to journalists that it’s a forced labor camp. Prisoners work up from 4 a.m. to 12 a.m. and often stay on that schedule for weeks at a time. Their families must provide food to the inmates, meaning those who don’t have a family have a hard time surviving because they’re starving.

Kim also pointed out that just because families are sending food doesn’t mean it’ll actually make it to the prisoners. Guards at the camp often take some of it for themselves.

About 2,500 people are reportedly imprisoned at the brutal camp. Many of them must work at nearby farms. The prisoners who remain at the camp make clothing for the North Korean military.

One family spoke to the Daily Mail about the camp, saying T’osŏng-ni prisoners are actually treated better than those at other camps. It’s mainly used for low-level criminals. More serious prisoners, like those accused of political crimes, are sent to ‘kwan-li-so’ camps.

Kim said his father was imprisoned at one of the more brutal camps. His sentence was for eight years, but he died within two. His family tried to have him transferred to the camp in the satellite images, but the guards said he was too weak and not able to work.

As Bad as Concentration Camps

Thomas Buergenthal, a Holocaust survivor who served on the International Court of Justice, spoke out against the North Korean prison camps in 2017. He said the camps are “as terrible, or even worse, than those [he] saw and experienced in [his] youth in [the] Nazi camps.”

Meanwhile, North Korea has long denied the existence of the most brutal camps and continued torturing people at will.