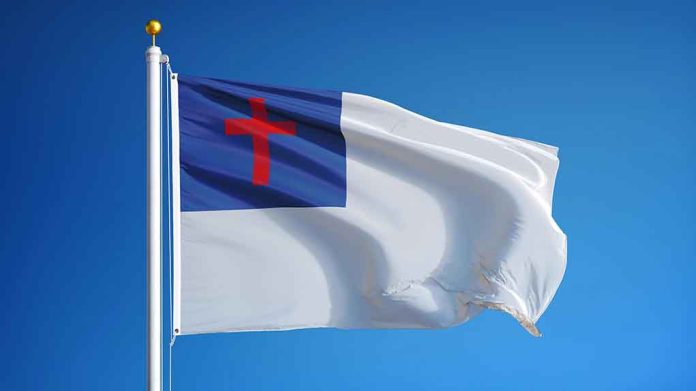 (NewsReady.com) – The Supreme Court (SCOTUS) has made religious freedom a priority in recent years, ruling time and again for First Amendment rights. Most recently, the high court handed down a decision about a flag in Boston, Massachusetts. Town residents have now seen the fruits of that victory.

On Wednesday, August 3, the City of Boston raised a red Christian cross flag outside of City Hall. The move came three months after the SCOTUS handed down its decision in the case of Shurtleff v. City of Boston. The case revolved around a request from a Christian group, Camp Constitution, to raise a religious flag outside of City Hall in 2017. Boston refused to grant the organization a permit to raise it on Constitution Day, September 17.

The Liberty Counsel, a law firm that defends religious freedoms, represented the plaintiff, Harold Shurtleff, and successfully argued the city was violating the First Amendment. From 2005 to 2017, the only request that the city ever denied was from Camp Constitution.

The decision by the SCOTUS was unanimous, something that rarely happens in the days of so much political division. However, there was no denying the group’s rights were egregiously violated.

LESS THAN 24 HRS. AWAY FROM HISTORIC CHRISTIAN FLAG-RAISING AT BOSTON CITY HALL!

Do you support the current court’s position on religious liberty? Would you like to see more rulings that reaffirm the First Amendment?