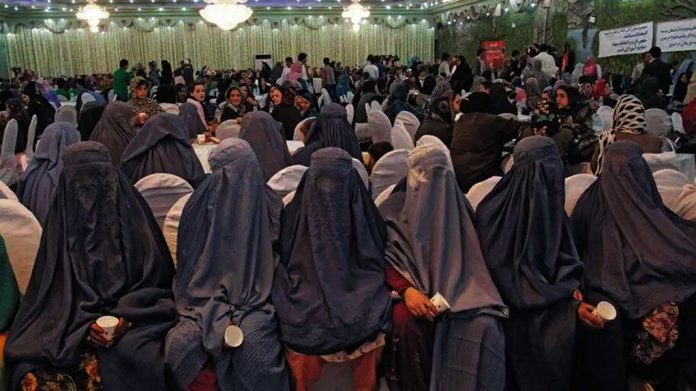 (NewsReady.com) – When the US pulled troops out of Afghanistan, it was clear early on that women would suffer as a result. The Taliban immediately started enforcing extreme Islamic laws that discriminated against women, even kicking them out of school. Now, the extremist government is implementing a new law against female TV anchors.

On Thursday, May 19, the Taliban ordered all female news anchors to begin covering their faces while on-air. According to the New York Post, when the rule was first announced, many of the news networks didn’t comply. By Sunday, the Vice and Virtue Ministry was enforcing the rule, and most female anchors were seen reporting with their faces covered.

Male anchors on TOLOnews covered their faces with black masks to show support for their female colleagues.

Male reporters at Afghanistan's @TOLOnews
are covering their faces on air in a powerful show of solidarity with their female colleagues — who have been ordered to cover their faces by a new Taliban decree https://t.co/xDUHtbSE1H

An unnamed anchor told The Guardian that he “shed tears” when he saw one of his female colleagues put a mask over her face.

Earlier this month, the Taliban also ordered women and girls to begin covering their faces while in public. Sher Mohammad, a Vice and Virtue Ministry official, said the best Hajib is the head-to-toe burqa that only shows the woman’s eyes.

The Taliban’s latest rule is just an example of one more way it’s making life miserable for females in the country.