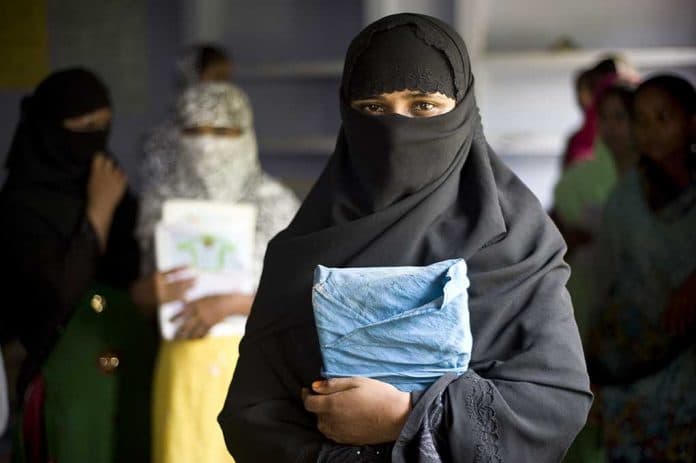 (NewsReady.com) – One of the many concerns about the Taliban takeover in Afghanistan is what’s going to happen to all of the women and girls. Prior to the invasion of their country, they’d spent most of their time indoors under control by extreme Sharia law. That changed during the country’s occupation where women gained freedom. The Taliban claims women will remain free, but their actions paint a different picture.

On August 17, Taliban spokesperson Zabihullah Mujahid held his first news conference. He promised women would remain free, but with a caveat: it would be within the confines of Islamic law. In other words, women won’t remain free. That much was clear when the Taliban shot a woman who failed to wear a burqa — the same day Mujahid held the conference.

There are already reports the Taliban is forcing women and girls to marry militants as they take over towns. A video is also circulating showing a man painting over advertisements that showcase women.

Yesterday Taliban spokesman Zabihullah Mujahid, made headlines by claiming that they respect women’s rights. But today this is the reality in Kabul: first they erased photographs of women then they’ll remove women from public sphere. Iran have experienced these lies 42 years ago. pic.twitter.com/UfubfDZ6UQ

During the press conference, Mujahid also said the Taliban wouldn’t retaliate against those who helped the US and its allies. However, there are already reports of the extremist group conducting door-to-door searches looking for journalists, government employees, and other US allies.

President Joe Biden has authorized 6,000 troops to go to the nation in an attempt to save the lives of Afghans who helped the US. Thousands of refugees are being resettled in other countries, including America. As for the Afghan women, only time will tell how many of their freedoms they’ll actually get to keep.