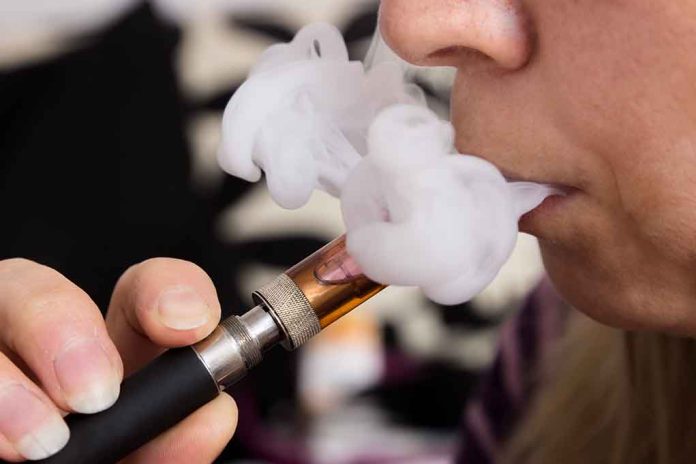 Is a Crackdown on Vaping Products Aimed at Teens Coming?

(NewsReady.com) – For decades, the US government desperately tried to get teenagers to quit smoking cigarettes. In recent years, the government has shifted its attention toward vaping products. Slowly, the feds have begun cracking down on it.

In 2020, at the end of former President Donald Trump’s administration, the Food and Drug Administration (FDA) ordered companies to remove flavored cartridges for e-cigarettes from the market. Officials believed the products targeted teenagers.

Amid the epidemic levels of youth e-cigarette use and the popularity of certain products among young people, FDA today finalized an enforcement policy on unauthorized flavored cartridge-based e-cigarettes most used by youth. https://t.co/3kJ3iNZLjZ pic.twitter.com/psNopnhjb9

The companies were also required to apply for regulatory approval in order to stay on the market. Due to a backlog, the FDA allowed the businesses to continue to sell their products while they tried to sort through the eight million applications that they have to evaluate. That review process is reportedly nearing its end, and the agency is expected to begin cracking down on vaping products and removing them from the market.

Campaign for Tobacco-Free Kids President Matthew Myers told NPR that he believes there will be a “relatively rapid removal” of vaping “products that have been the primary cause of the youth e-cigarette epidemic.”

Brian King, @FDATobacco director says "everything the FDA does, particularly the Center for Tobacco Products, gets litigated. It's critical we ensure that everything we're doing is both scientifically defensible & legally defensible — that takes time." https://t.co/UxAjgY88Gc

Brian King, the head of the FDA’s Center for Tobacco Products, said the review process took a long time because the agency had to be extra careful since everything it does “gets litigated.”

According to the American Heart Association, roughly 3,500 young people start vaping every day. Once touted as a healthy alternative to smoking, the aerosol that is produced when puffing on e-cigarettes contains particles that have been linked to respiratory and heart diseases, as well as cancer.

Have you talked to your kids about vaping?