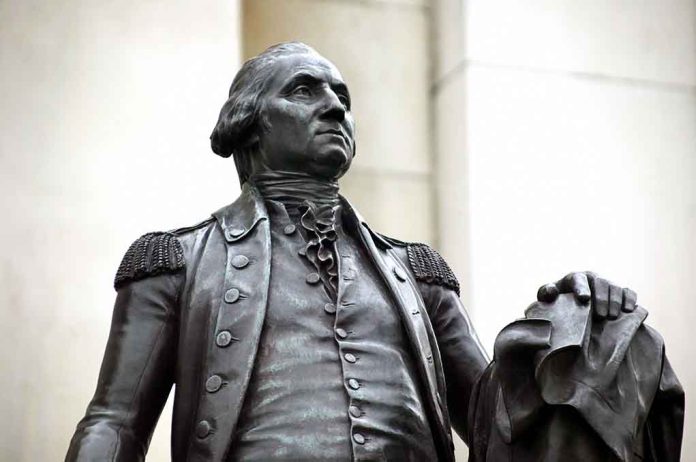 There Was a Secret Plot To Kill America’s First President

(NewsReady.com) – Father’s Day is upon us, and the nation is celebrating the amazing men who are raising incredible kids. It’s also a time when some are taking a moment to remember a different father, the original forefather of America — George Washington.

President George Washington wasn’t just America’s first commander-in-chief; he also commanded the Continental Army during the American Revolution and led the convention where the Founding Fathers wrote the US Constitution. In his role as a great leader, he made a lot of friends, but there were also some enemies — and an assassination plot.

In June 1776, the British Army was preparing to invade New York. Washington was at the headquarters of the Continental Army in New York City, preparing his troops to defend the country. At the same time, the Army was preparing to hang Thomas Hickey, a former British soldier and bodyguard of Washington’s, who reportedly plotted to kill the general.

In the book “The First Conspiracy: The Secret Plot to Kill George Washington,” authors Josh Mensch and Brad Meltzer unraveled the plot. According to the authors, in April of that year, the royal governor of New York, William Tryon, enlisted support from men around the area to undermine and later kill Washington.

Washington was reportedly suspicious of Tryon from the beginning and tried to prevent him from speaking to colonists. A secret committee was formed in May to try to uncover threats. In mid-June, authorities arrested Hickey and a man named Michael Lynch for passing counterfeit money. While they were in jail, Hickey spilled the beans on the assassination plot.

Another inmate told authorities what Hickey said; the investigators then spoke to other suspects and witnesses. Hickey was court-martialed on June 26 and found guilty of “sedition and mutiny” as well as corresponding with the enemy (the British). The court sentenced him to death.

Two days later, on June 28, 20,000 people got together in a field north of New York City (now the intersection of Chrystie and Grand Streets near the Bowery in Manhattan’s Lower East Side) where the Continental Army mounted gallows. Hickey became the first soldier to be executed by the Continental Army during the Revolution.

Did you know about the plot to kill Washington?