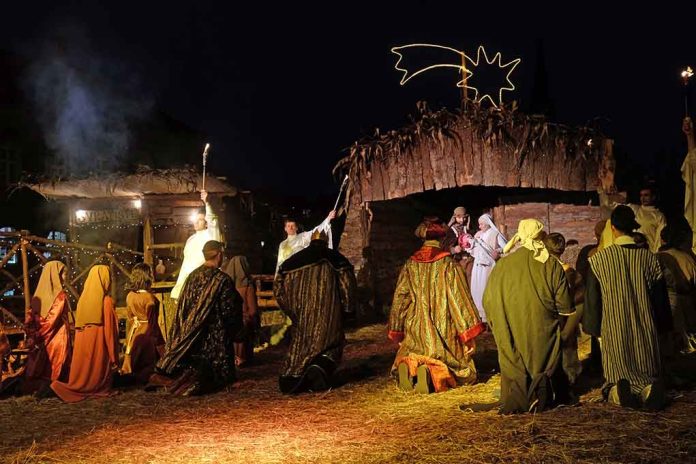 (NewsReady.com) – Christmas season is upon us, and people are setting up displays across the world. In the US, that means towns and families are pulling out their nativity sets to pay homage to the reason for the season: Jesus Christ.

An organization in one Arkansas town set out its annual scene depicting the birth of Jesus. But this time, the mayor had a problem with it. That didn’t stop the group from pushing forward.

Since 1950, the Beta Sigma Phi sorority has set up the nativity scene in Eureka Springs, Arkansas. They handed the job off to The Great Passion Play, which now sets it up. At the end of November, Mayor Butch Berry asked them to remove the scene this year.

The Great Passion Play Executive Director Randall Christy revealed he’d received the request. Instead of listening to the mayor, Christy decided he was going to keep the display up and began posting about the issue on Facebook. Thousands of people showed support for his cause.

After some digging, Christy discovered the mayor’s request came after a lawsuit threat. The city attorney decided the best course of action was to remove the display.

The mayor eventually decided he would issue a permit for the nativity scene. He made the announcement in a Facebook post and said other secular displays would also be allowed to be displayed in the public park alongside the nativity scene.

According to Fox News, Christy declared the town was going to “keep Christ in Christmas.”

Not the First Controversy

In 2021, Rehoboth Beach, Delaware, where President Joe Biden owns a beach house, settled a lawsuit after it was embroiled in a year-long fight over a nativity scene on public property. The city was sued by the Knights of Columbus Star of the Sea Council 7297 because the city requested that St. Edmond Catholic Church remove a nativity display.

The two parties finally settled the suit, and the city agreed to display a full nativity scene through Christmas 2022. The city has also prohibited unattended nativity scenes on public property.

Do you have a favorite nativity scene that you visit every year? Tell us about it.