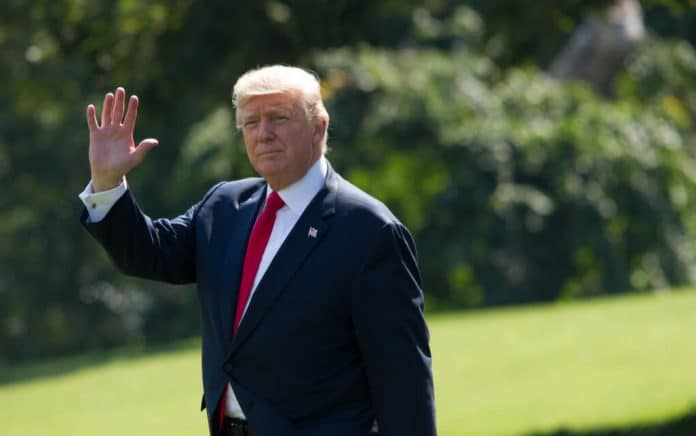 (NewsReady.com) – On April 28, President Joe Biden gave his first speech before a joint session of Congress. During the speech, the commander-in-chief lied a number of times about the issues facing the country. The next day, Americans wanted to know what former President Donald Trump had to say about it. He criticized his successor for trying to take credit for the vaccine and other things he said. He also made a very interesting remark that has people talking.

During his interview with Fox News’ Maria Bartiromo, Trump spoke about the possibility of a 2024 presidential run. He told the host that one of the people he has in mind as a running mate, should he choose to run, is Florida Governor Ron DeSantis (R).

The former POTUS said that the governor is a friend of his and after he endorsed him, “he took off like a rocket ship.” Trump praised DeSantis for the “great job” he’s doing as the head of the Sunshine State and said he would “certainly” consider him as a running mate because he’s a “great guy.”

The Florida governor ran as a hardline supporter of Trump. One of his campaign commercials even featured him reading his children a bedtime story about building a wall. When he won the election in 2018, it was clear that he was going to run Florida like Trump was running the country.

For the most part, DeSantis stayed under the radar for the first year of his term, but the coronavirus shot him into the limelight. He refused to fearmonger and impose long-lasting draconian lockdowns in his state. Democrats widely criticized him for his choices, but they ended up being wildly successful. As a result, the Sunshine State did not suffer the same way states like California and New York did.

With a record like that, it seems like he would be a perfect choice to run for office with Trump.