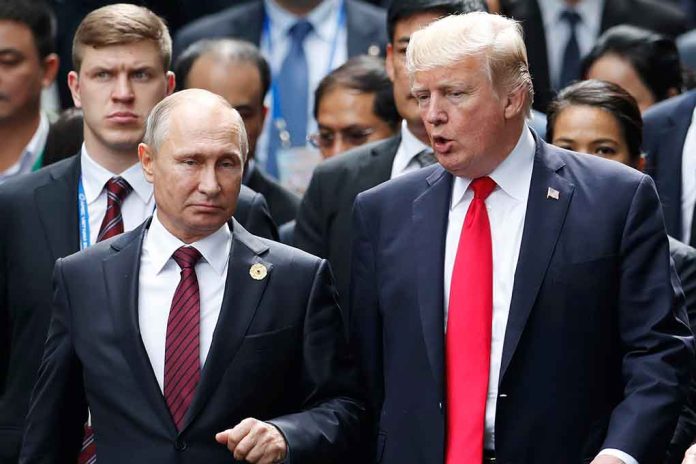 (NewsReady.com) – Former President Donald Trump is calling on US leaders to remain “cool, calm, and dry” in response to the recent disabling of Nord Stream Pipelines. In a post first shared to his Truth Social account on September 28, the ex-leader labeled the incident as sabotage and implored the American government to measure its response carefully. Trump also offered to serve as an intermediary, communicating directly with President Vladimir Putin.

Trump suggested that American leaders create a group and attempt to oversee peace talks between Russia and Ukraine. He nominated himself as the best person to spearhead the effort should the government move forward with the plan.

The former president shared a video of a quote from President Joe Biden claiming if Russia invaded Ukraine, American leaders would disable the Nord Stream pipeline the same day. “Wow, what a statement,” he exclaimed. “World War III anyone?” Whether he was accusing President Biden of instigating World War III or suggesting the recent pipeline attack would trigger such an event remains unclear.

According to the Washington Post, European policymakers overseeing the incident are also calling it sabotage. Many, including Danish Defense Minister Morten Bodskov, are insinuating Russia was responsible for the attack.

“Russia has a significant military presence in the Baltic Sea region,” Bodskov explained, “and we expect them to continue their saber rattling.”

Russian Foreign Ministry Spokeswoman Maria Zakharova, however, took the opposite stance. She tweeted the same video of President Joe Biden as Trump, demanding the commander-in-chief reveal whether America was responsible for the attack.

💬 On February 7, 2022, Joe Biden threatened to end #NordStream.@POTUS must give a definitive answer whether the United States acted on its threat on September 25 and 26, 2022!

Washington is thus far refusing to admit responsibility. In fact, Adrienne Watson, the White House’s National Security Council spokeswoman, totally dismissed the claims. She suggested it was just another example of Russian disinformation.

There are serious questions about whether now is the right time for Donald Trump to offer up his services to the government. The former president is currently fighting a protracted legal battle with officials after the FBI found classified and top-secret documents in his home during a raid on August 8.