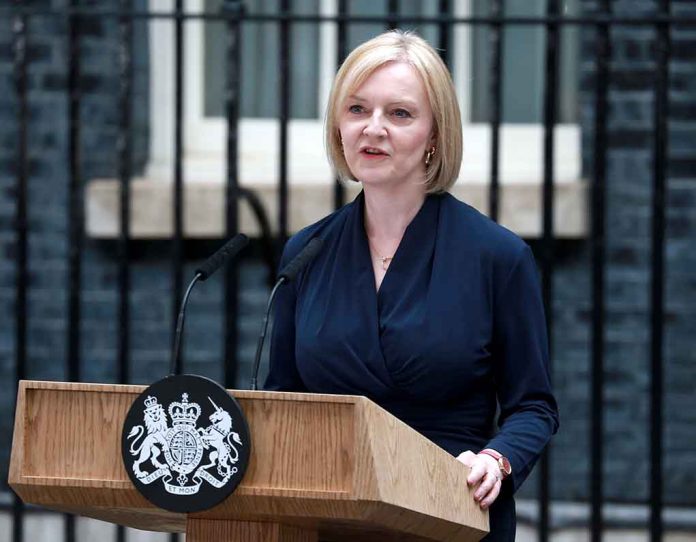 (NewsReady.com) – Britain’s new prime minister has taken an uncompromising stand with Russia. Talking to reporters last week, Liz Truss said Vladimir Putin must pull out of Ukraine and compensate the country for the damage done or face permanent exclusion.

Putler must leave Ukraine and pay “proper recompense” for his invasion through financial reparations before he can ever return to the international fold, Liz Truss has warned.https://t.co/Yye28HzWpq

On her first trip abroad as prime minister, Conservative Party Leader Liz Truss told journalists if Russia wants to rejoin the international community, withdrawing its forces from Ukraine is a “red line.” Then, the Kremlin should pay reparations for the widespread destruction in Ukraine, using its gas and oil wealth to finance the country’s reconstruction. She added, “we need to make sure Russia is never again able to threaten countries on its border.”

Truss, who took office on September 6, had to delay most government work because of the late Queen’s funeral. Still, she made clear she plans to continue her predecessor Boris Johnson’s hard line on Russia. However, she left a lot unsaid, possibly to keep her options open.

Truss didn’t confirm whether withdrawing from Ukraine includes Crimea, which has been in Russian hands since 2014. She also didn’t go into detail about how to prevent Russia from attacking any more of its neighbors, although there were some clues.

Truss has promised that next year, the UK will “match or exceed” the $2.5 billion in military aid it sent to Ukraine this year. She also plans to significantly increase Britain’s defense budget from 2.2% of GDP to 3% by 2030. It looks like the UK, energized by the war in Ukraine, plans to play a major role in holding the line against Russian aggression.